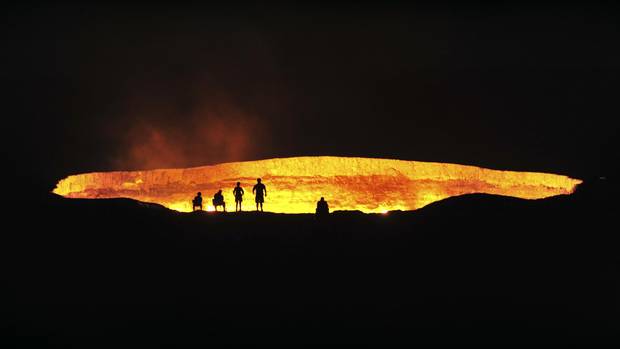 Chasing the sunset, we raced through the Karakum Desert, driving hard on the road to hell. Although the old saw says it’s paved with good intentions, ours wasn’t paved at all. We fishtailed through the sand and kicked up a rooster tail of dust that looked a mile long and I held on tight, crammed into the back of a Land Cruiser as our Turkmen driver pushed his vehicle to breakneck speeds, music cranked and tuned to a mix of Euro-pop and twangy Eastern strings. As we wove around hills and roared over ridges, old, disused pipes and drilling equipment flashed by in the shadows. A moment later we spotted a lone camel, up high on a copper-coloured knoll to our left. But both were soon left in the dust as we hustled toward a flaming crater on the horizon. Seeing the flames, our little group – a mix of English and Canadian travellers – twitched a bit with excitement. “Hell,” said my seatmate in a crisp Liverpool accent, “here we come!”

I was in Turkmenistan, a Central Asian country whose attractions range from the sublime to the bizarre… [read more]